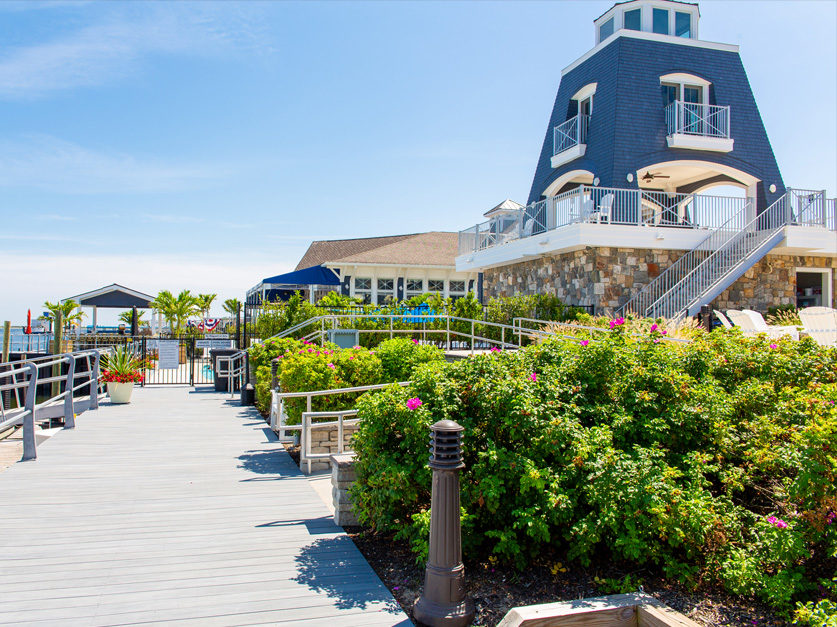 December 2016: Sandy Hook Bay Marina, a Bollerman Project, located at One Willow Street in Highlands, NJ was selected by the Monmouth County Planning Board to receive the 2016 Planning Merit Award in the nomination categories of Adaptive Reuse and Redevelopment, Recreation, Resiliency, Economic Development, Sustainability and Environmental Conservation. The award was presented to Sandy Hook Bay Marina at the December 19, 2016 Planning Board Meeting in Freehold by the Director of Planning, Ed Sampson, Freeholder Serena DiMaso and Freeholder Lillian Burry. This redevelopment project represented one of the largest private investment reconstruction projects post Super Storm Sandy and also qualified for a grant under the National Boating Infrastructure Grant Program.

The Highlands Business Partnership nominated the project by method of application describing the history, obstacles, progression and completion of the project. The Sandy Hook Bay Marina is an $8.5 million-dollar project that was designed to become a significant visitor destination, boasting 130 new floating dock slips, 15 of which are reserved for transient boaters, and accommodations for vessels from 25 to 70+ feet in length.

The Sandy Hook Bay Marina is located on the shores of Sandy Hook Bay in the historic, waterfront town of Highlands with a long maritime history dating back to when Henry Hudson moored in the safe protected harbor of Sandy Hook Bay. The marina was conceived in the early 1960’s by three Monmouth County based entrepreneurs interested in adding to Highland’s rich maritime history by opening a marina and building boats. The marina was built in 1960 and with the addition of a restaurant shortly thereafter, it quickly became a landmark location and ideal departure point for fisherman and sailors fronting the Sandy Hook Bay with immediate access to Raritan Bay, Atlantic Ocean and Navesink and Shrewsbury River systems.

Successive owners of the marina neglected to make the investment necessary to maintain the marina and upland infrastructure and the property gradually fell into disrepair. In 1992, the Nor’easter inflicted severe damage to the already vulnerable marina infrastructure from which it never fully repaired. Sandy Hook Developers purchased the marina in its dilapidated condition several days before a foreclosure sale in 2004 and devised a multi-year improvement plan for the property and marina basin with the assistance of maritime, marketing, architectural, engineering and legal professionals to restore its reputation. Unfortunately, litigation and the great recession slowed the planned improvement.

On October 29, 2012 Superstorm Sandy completely obliterated the entire marina reducing upland structures to a pile of rubble and scattering boats for a quarter of a mile. The utter devastation took 6 months to clean up and forced closure of the marina. Highlands’ officials expressed their support for the redevelopment in the post Sandy environment due to its economic impact on the community. After several months of soul searching, the marina owners decided to undertake the challenge of not only redeveloping and revitalizing the marina, but expanding it with the goal of achieving its full potential and restoring its reputation as one of the finest marinas in New Jersey. Restoration of the marina was part of a 12-acre master plan that included redevelopment of an adjacent property with 49 town homes, which were later sold to Pulte Homes.

After four years of planning, designing, achieving 28 approvals, and a 24-month construction period, the marina opened in May 2016. The redevelopment and revitalization of the marina included the relocation of the entrance, expansion of the wave screen, replacement of all bulk heading, new docks A and B, and reconstruction of Dock C, new lighthouse stanchions, new electric and water, new stake and mooring piles and pile mates. The basin was dredged to 7’ mean low and the dredge material was used to fill and raise the property out of the flood zone. The upland improvements include a 3-story lighthouse building which houses the marina office, ships store, restrooms and a 2nd story veranda deck with panoramic views of Sandy Hook Bay, Gateway National Park and the New York City skyline. In addition, there is a boardwalk, naturalized landscaping buffers, outdoor pool, fire pit and barbeque area for marina members and transient boater guests. Completing the site and opening Spring 2017, is Joe Amiel’s Bay Pointe Inn, an up-scale 150-seat restaurant, café and bar.

The rebuilding of Sandy Hook Bay Marina has proven to advance the goals and objectives of the Monmouth County Master Plan’s overall theme and vision statement, supporting investments and actions that sustain our high quality-of-life by redeveloping, revitalizing and rediscovering properties that have fallen into disrepair and /or have been devastated by natural disasters, including Superstorm Sandy. The redevelopment also enhanced and strengthened Highland’s distinct identity as a historically significant maritime community, including its long tradition of clamming, fishing, boating and other waterfront recreation.

“This is an achievement that we can point to with great pride,” said Carla Cefalo-Braswell, President of the Highlands Business Partnership. “We are grateful to Bollerman Developers for inspiring this vision. We remain confident that this important new addition to the Borough’s amenities will spark prosperity and economic development throughout our town.”